It all started with the curtains..Just as my house is probably the only house with all the internal walls in different colours, so are the curtains.. I can’t stand uniformity..rooms with same curtains reminds me of impersonal hotel rooms..It took a while to find the right curtains..( especially because I am a pishukki ( stingy) and refuse to spend 1000’s  of $ for curtains..)

But then it became boring..it is summer time and I like bright colours..So I changed the curtains in the living room to blue and green sheer.. ( and a bit of truth..the original curtains that adorned the windows will fade with the summer sun and I really don’t want to buy new ones!! seriously pishukki)

And I had an array of gold, red and yellow cushions that certainly didn’t match the green and blue sheers.. The cheapest cushion covers I could find was 15$ each..and they were in a shop that sold all the Indian goodies..How can I bring myself to buy a made in India cushion cover for 15$ each, when I used to buy new ones every other month from the street vendors in Bangalore for 50 Rs for three? ( yes it happened 2 decades ago and I know you probably won’t get any such deals these days.. but my mind and wallet are still stuck to those times..)

So the only choice I had was to make my own..and if my mother was here..she would have had a heart attack..for you see I can do a lot of things, but sewing isn’t one…the sewing machine and I don’t understand each other. To begin with..I can’t even  stitch a straight line.. and that says it all..
I went to buy the fabric.. I didn’t know how much material I needed..  Smart people will tell you, the first thing you need to do before venturing to sew something  is to measure.. but the cushions were at home and I didn’t want to make another trip..I asked the shop assistant for help and she helped me tremendously by telling me that cushions from various manufacturers vary in size!! I took a chance and  bought a meter of each colour ( 6$ /meter)
I did one smart thing though.. I bought green thread..
I checked youtube..my teacher..my guide for inspiration..and I found this

I remember my mother telling me that fabric has some “weave” and you can’t simply cut in any direction.. I have no idea what she meant.. when I looked at the meter of fabric, I figured if I fold it in half from top to bottom instead of left to right ( imagine a rectangle) , I can make two cushion covers. I have a feeling I am not supposed to do that, but who cares? 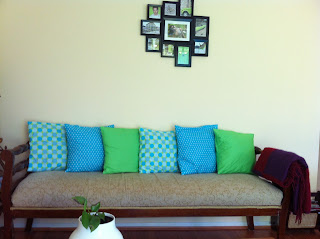 You can see my sad money plant too..
BTW, the photos in the frame aren’t me.. I bought the frame for the green colour in the photos..