I was the first to arrive home yesterday. I opened the door to find Kirra literally jumping and shaking her body and then rolling down and asking for a belly rub. Until then I had not attempted to touch her. I tend to freeze every time she came anywhere near me and I think she understood my fear and left me alone. But when I saw her all excited to see me, somehow I couldn’t have just ignored her. So, very gently I gave her a belly rub ( and then I went to wash my hands!)

I guess I am getting used to having a dog.  The folks at RSPCA told me that Kirra would live at least 15 years, that simply means I will be 60!  I wondered about the next 15 years of our(KIrra and I) life.

She would say goodbye to Yaya in 2 months time. She would see Toothless going for his semi formal in a few months, then say goodbye to him when he goes to Peru for student exchange. Then she would see him in a tux attending his formal, his graduation etc next year. She would then say goodbye to him when he goes to Uni. Fortunately for us, Baby will be with us for another 4 years.. After all the kids leave home, perhaps the next major event Kirra would witness is their marriage. At this stage I have no hope that it would happen ..all three are career minded and don’t see the need to settle down. My mother became a grandmother when she was 60..I wonder if the two old biddies(again Kirra and I) will get to see a little baby in 15 years time..

This is what she did while we were away yesterday. 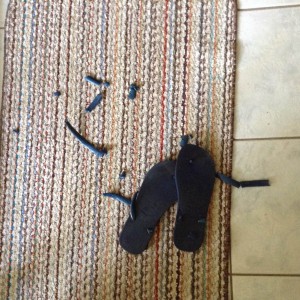