I saw this article few months ago and wanted to post it here.

“Vayasaayi” ( aged/) is a word I have heard often while growing up in India. There was an expiry date to all activities in life determined by the society. When you were young, if you did something that wasn’t socially acceptable, you were told ” mottennu virinjilla” ( Haven’t even hatched completely from the egg), but once you crossed the socially accepted hatching period, every thing you did was dependent on vayassayi. If a middle aged woman wanted to wear a sleeveless blouse, she was criticised  by saying vayassayi…ennittum…These types of limits set by the society affected the women much more than men.

Then you read articles like this that are so much more inspiring.. 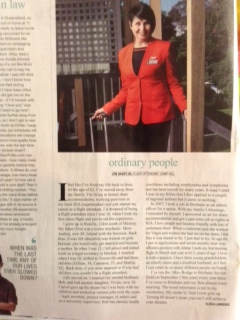 I know the photo is blurry and vayassayi people can’t see.. so here is the gist of the article.

I feel like I’ve lived my life back to front. At the age of 62, I’ve moved away from my family. I’m living in rented share accommodation, working part time at my local IGA ( supermarket) and just started my career as a flight attendant. I’d dreamed if being a flight attendant since I was 16, when I took my first plane and just loved the experience.

I grew up in Rosalie, 12 km south of Mackay. My father Fred was a motor mechanic. Mum Audrey, now 88, helped with the business. Back then, it was felt education was wasted on girls because you would only get married and become a mother. So when I was 15, I left school and started work as a legal secretary in Mackay. I married when I was 20 and had three children ( Gilliam 38, Cameron 35 and Martin 32). Back then, if you were married or had children, you couldn’t be a flight attendant. Life moved on. I married my second husband and had another daughter Vivian now 26. I never gave up my dream but  I was busy with my children and worked at various jobs. It wasn’t until I was in my fifties that I first applied to a couple of regional airlines, but it came to nothing.

In 2007, I took a job in Brisbane as an admin officer for a union. I answered an ad for a share accommodation and got a part time job at nights at IGA. I love people and became friendly with lots of customers there. When a customer said she worked for Virgin and wished she had me on her team. I felt it was meant to be. I just had to try. At age 60. I put in application and seven months later, I was offered a position with Jetstar. I took my first training flight in March last year at 61 1/2 years of age. I love it with passion. I have three young grandchildren, an elderly mom and a disabled husband., so I feel I can relate to so many different people on board.