First Kellie’s Folly. My father was very much interested in William Kellie Smith and his folly and it was he who got me interested. Kellie was a Scottish Civil Engineer who arrived in the then British Malaya seeking his fortune. ( 1890, the same year Cecil Rhodes, founder of De beers reached Harare/Zimbabwe). Kellie made his fortune clearing the land (forest) for plantations. He then went back to Scotland and married his sweetheart Agnes. I don’t know where they lived when they came back to Malaya. Soon, Agnes gave birth to their daughter Helen. Kellie wanted a son to carry on the family name. 10 years later, Agnes gave birth to their son Anthony. It was after Anthony’s birth that Kelly decided to build his castle. He was very fascinated with Indian Architecture, especially the temple designs in South India. Being a civil engineer, it was easy for him to plan his castle. He brought Tamil labourers from India ( as indentured labourers) as well as all the building supplies. There are many versions of what happened next..Some say he was a good boss and even allowed his labourers to build a temple in his land and others say that he was very mean to the labourers and even got them to make a statue of himself and place it next to the idol in the temple the labourers built for them. Eventually Kellie lost a lot of money and also lot of his labourers died during a flu epidemic. My father thinks Kelly went to Europe to look at the Moorish architecture for inspiration and also to buy supplies and I think it was more to do with looking for further business opportunities. ( Franco became a general that year and Europe was in the throes of massive political changes) Kellie  died in Portugal in 1926 ( Pneumonia). His castle was never completed and Agnes sold the castle and went back to Scotland with her children.

Few things about the castle. It is still there in Batu Gajah ( Ipoh), it was so huge that Kelly was going to have full size tennis court in the second floor. The castle was also to have the first elevator in Malaya..

And now Sarah’s folly.. When I bought my house, in one corner there was a scraggy looking shrub that did nothing. The area was a slope and the plant looked like it was tired of standing and was practically prostrate on the ground. It wasn’t pleasing to the eye, it didn’t attract birds and I thought I will plant a native shrub. It took me weeks to chop the shrub and get rid of the roots. I planted a bottle brush tree, the Lorikeets love the nectar and I love lorikeets. All good, so I thought. Within a few weeks, I noticed that the weeds seem to love the area and one day while pulling the weed I fell down the slope. That is not good, I thought. So I bought mulch and hoped that the mulch along with a weed mat will prevent the weeds from growing. Unfortunately, I forgot that mulch really doesn’t have any anti gravity properties and the smooth surface of the weed mat just encouraged the mulch to slide all the way down. Weeds seems to have loved my jeopardy and started to really grow fast. Earlier, only the scraggy shrub looked ugly ( and I realised it actually helped prevent the weeds from growing only after cutting it) and now the whole place looked unsightly. Then inspiration struck. I thought I will build a two level steps, that will take away the slope and I can even place a garden bench there..so when I am old and bored, I could sit outside on a sunny day and twiddle my thumb. So I did..

What I didn’t know was that there was a lot of underground water in that area (ozhukku). If I had a bit of common sense, I would have noticed that the land is sloping ( it is actually the lowest point in the neighbourhood) and water always find the shortest route to where ever it is heading.. in my case to the stream by the side of my house. The past few weeks it has been a nightmare..At one stage, water was flowing over the blocks that I placed, like a natural water fall.. I did place the drain pipe ( followed all the protocol, geo fabric, aggregates ect)behind the wall that I built.. Every time it rains, I have a mini water fall..and now, I need to continue to build up the wall to the side with the drain pipe behind it..All of this just to have a native plant. 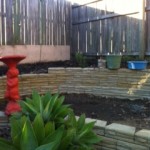 From where the fence from either side meet ( I hate that pink board the previous owner had nailed to the fence, I still don’t know why it was done and I don’t know what to do with it), initially the land sloped all the way to where the agaves are. What I did was to build up two levels. And now where the bird bath is, the whole area is muddy and I will now have to continue to build to the left and drain the water.. Vazhiye poya vayya veli thalelottu eduthu vechu..

PS: This wasn’t a one woman project. I had lots of help from friends and family.