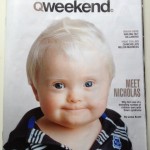 When I saw the photo of Nicholas, I fell in love with his beautiful blue eyes..and his impish grin and I wanted to hold him and give him a million hugs..because I also noticed the wide set eyes and knew he is a lucky one. The one who is allowed to be born, .because the prenatal tests would have  certainly been positive for Downs and his parents could have killed him.

I try to live a life without regrets, but sometimes when I see the 2 empty chairs at my dining table, I wish I had more children..I wish my son had a brother who would have understood all the things my son finds fascinating, instead of the  the two annoying  and clueless sisters  he has to live with. But I was already 31 when I gave birth to my youngest and I knew the chances of a child born with Trisomy increases with my age and I felt I had no right to bring a child in to this world knowing very well that there was a chance my baby could have down’s. My age was against me and that was a risk I couldn’t take. My mom had my youngest sister when she was 44 and I really wanted to convince myself that nothing would happen, but the little voice in my head did what it does so well..it asked over and over what if?? what if??

I am an anti abortionist. ( except mother’s health and rape). If a baby took a breath after his or her birth and if you killed the baby the very next second, you will soon find yourself counting the bars in the cell. There are  laws that says if you were the cause for a pregnant woman to lose her life and that of her unborn child ( even a car accident), you will be guilty of the murder of not just the mother, but also the unborn baby. But somehow, it is alright for a mother to chose if she wanted to carry her baby or not. Because Abortion is legal in most countries and  It doesn’t matter that the baby’s heart starts beating at 6-7 weeks and it is really  alive at the time of his or her murder.

Now, with all the advance in medical technologies, we are  able to find if the baby is “healthy” and if it isn’t, it is just a minor procedure and a few days of discomfort for the mother..Yet, we think Hitler’s eugenics and action T4 policies were horribly wrong. Action T4  ( http://en.wikipedia.org/wiki/Action_T4)

Except in the case of rape, every woman who is pregnant chose to have sex and the baby is the result of having sex. You, as a woman have a choice to not have sex or use protection, but you do not have a god given right to kill your unborn child because you aren’t ready to have a baby or because the baby is not ‘healthy’.

Children are a gift..to be loved and cherished ..

( Long weekend. Away until Tuesday)

15 thoughts on “Not your god given right.”