In Kerala  the temperature usually never dropped below 20 degrees and once when it did, it was the breaking news story in Malayala Manorama. “fog in Kottayam” was the title ( 1983). I remember feeling despondent after reading the paper that I, who lived in Kottayam missed the early morning fog the previous morning. I made an effort to wake up early for weeks so as to not miss a chance to see the fog. But fog was always elusive.
It was such a thrill to go on a school trip to Kodaikkanal..the way the mist wraps around you like a blanket..and to stand at the suicide point and watch the clouds coming up to swallow you while sniffing the fresh smell eucalyptus oil..those were magical..more so because you never experience anything similar in Kottayam.

And then I went to Bangalore and the winter, oh so lovely!!
Of all the 4 seasons, I love winter the most. There is something so magical about cold crispy winter mornings!

In Bangalore,the morning  rounds start at 8,
I wake up at 7.45 and as I run to the washroom, holding the mug, bucket, toothbrush, towel etc, I stop near the window facing the boys hostel. Most of the time the fog is thick and I can’t see anything, but I knew without any doubt that the bike and the rider is waiting there..The rider in a black leather jacket and while brushing my teeth and trying to wash my face using the ice cold tap water, I try to imagine the shirt he will be wearing. sometimes even send a plea to the unknown, “Oh, please let him wear the sky blue shirt”

Exactly at 8 am, the prof would take the attendance and I will be just locking my room door.

The ride to hospital depended on what dept I was posted to. If I was posted to a dept I liked ( medicine), the rider will ride the bike fast and I held on to him, to keep me warm and safe.  And I rest my chin on his shoulder and sniff the kouros as well! ( Imagine feeling breathless because it is so damn cold and still trying to breath in and hold on to that smell!)
If I was posted to a dept I hated(community medicine) and I had no intention of attending the rounds, we went to the tea shop behind the hospital. The shop was run by a husband and wife team who knew to warn us if they saw anyone in authority ( profs/lecturers/ward boys etc who can and will snitch about us) coming to drink tea at the shop! When that happens, we will be sitting there with few books opened and discuss the case we just saw during the morning round and will be arguing about the ddx ( differential diagnosis)

The tea served there had a reddish hue. ( to this day I don’t know what tea it was) and it was the best tea I ever had. Sipping the tea, while trying to keep myself warm, sitting down in front of a guy who meant the world to me while he talked about his childhood, his youth was priceless.

Eventually many students began to hate community medicine ( and other subjects) and we had a huge gathering of friends most mornings.
They all knew how much I loved drinking tea. ( The best tea estates in India, the difference between ctc and orthodox tea etc were our topics of discussion)

I never went back to the tea shop after the accident.

Last friday, I came home to find a parcel outside my door. 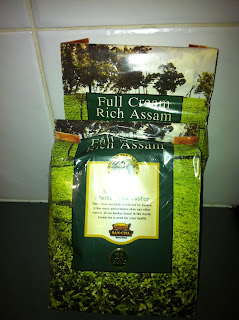