But first,I must write about my obsessions.. I have many..but the top on the list is the delusion that, I get thorns in my maternal crown and lose my halo if I don’t bake the birthday cake from scratch..

I spend many hours in the middle of the night baking the perfect cake, followed by making my own icing ( I risked losing the halo, if I used store bought icing sugar, so I made my own!!) and then spend hours doing the perfect icing..If there is a speck of cake crumb on the icing..I redid the icing again.. till my masterpiece was a cake of total perfection unrivalled by any in this whole wide world.

And the joy I saw on my children’s face when they cut the perfect cake baked from scratch….My hard work was well rewarded.. So I thought, till I spend the Christmas with my Children’s grandmother in Seattle and we had to bake a cake for my youngest daughter’s birthday..I wrote the list of items to buy from Safeway..and the grandmother wanted the privilege to bake the birthday cake and grudgingly I let her.. I was going to stand there in the kitchen and make sure she baked the perfect cake for my beautiful daughter..But, before I could say a word, out came a box of Betty crocker’s vanilla cake mix from the pantry..I think I was in total shock..I couldn’t tell her that I never fed my children such ‘terrible’ things like cake from a box!!! How can anyone do that to their children? Cake should be baked..like it should be.. beat the butter and sugar till it is fluffy..add one egg at a time.. etc etc..
I was going to tell my daughter that, I will bake her a proper birthday cake when we go back home and also wanted to ‘shine’ a bit in front of my children and add few extra feathers in my crown.. because unlike their grandmother, their mother really spend her time and energy to bake the best cake..
Sadly, it didn’t work that way.. She baked the cake, then mixed some raspberry jello, poured it over the cake, set it in the fridge and to this day my children talk about the awesome cake grandma made and no mention of the train cake ( one engine and 4 wagons..each wagon carrying a load of treasure..M&M’s, candies etc, it took me 6 hours) or the unicorn or the ballerina..etc etc.
I learned my lesson..
and Yes I still bake cakes from scratch when I am in a mood.. But for b’day parties..it has always been Betty crocker..

This time, I bought one box of Chocolate cup cakes, one box of strawberry cup cakes and a box of lemon cake mix. I baked the cup cakes, baby did the icing.. some cup cakes had so much icing that it was falling out from the side, some cupcakes barely had any..and I was tempted to fix it..but I took a deep breath and told myself it is ok to have few thorns in my crown,
Birthday cake was a disaster.. will come to that later!!!
I made some jello..
Bought sausages.
Menu was, hot dogs, fairy bread, jello, cup cakes, chips and popcorn..Party was from 3 to 6. At 3.05, there were already 18 kids in my house and I must say I was panicking if I would have enough food for everyone..
By then it also started to rain heavy..
And the kids started to play basket ball in the rain..
At 3.30, there were 29 kids.
I divided them in to two groups, gave each group of a list for scavenger hunt.. One group had to go to the houses on the right and other on the left and ask the neighbours for items like a socks with a hole, a hanger etc..Kids were given strict instructions as to not to damage any property..I had one of the mother’s follow one group and I followed the other group. My group cheated.. One of the kids who attended the party also lived in the same street on our side of the road and we got all the stuff on the list from his house.
“Not fair “the other group cried..But we ignored them..The price was a box of Lindt chocolates.It was very tasty!!
There was a puddle of water from the main door to my kitchen when everyone came back after the scavenger hunt..

Then we had the best part of the party.. water slide… 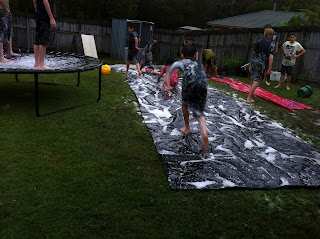 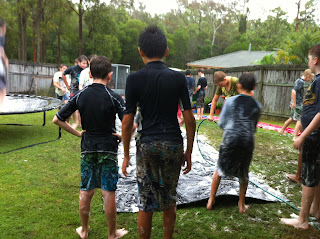 I used two sheets of builder’s plastic ( tarp) placed it on the slope in the backyard, sprayed with water and tons of dish soap and the kids had fun sliding down the slope..

When they finished with the water slide..there was a puddle of water from my kitchen to the living room..

And now the cake..

Since I was baking the cake from a premix, I thought I might as well go the whole 9 yards and used al foil pan instead of a  proper cake pan.. ( I thought I won’t have to wash the cake pan!!). But the last time I baked lemon meringue pie in an al foil pan, when I lifted the pan to remove the blasted pie from the oven, the middle of the pan caved and the pan folded like a book..and lemon meringue pie that had a perfect meringue on top became lemon crash landing pie..that had no meringue on top. So to avoid another such calamity, I placed the al foil pan on a cookie tray..only thing is my cookie tray is from Canada and is a bit large..so when I placed the tray in the oven, it was lopsided.. I thought I could correct it if I turned it the other way, half way through cooking..
Some times the law of physics doesn’t work that well as I hoped it would.. so we ended up with a cake that looked like a boat ramp..Not to be beaten, I made the lopsided cake in to a two way road..covered with left over icing from the chocolate cup cakes, placed few cars on top.. Nobody cared!! And my son probably is the one boy who got a ‘road’ birthday cake.. He survived..so did I.. 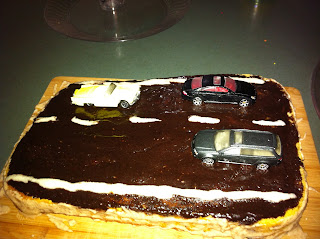 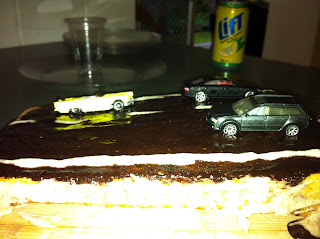