This was my first room at the medical college hostel. Bear with me, somehow the blog photo upload keeps inverting the image and I just don’t have the time to figure out why it is doing it.. 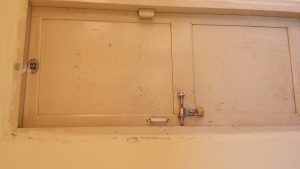 I went back to the medical college campus after 23 years. So much has changed.

But what I went through.. that has scarred me for life.

17 year old girl from Kottayam who had barely two years of education in English, who didn’t speak a word of English and who came from the most screwed up family. I had nothing that I could lean on to.

When every single female student had their mother with them (to be honest, most of them had their father with them, but the fathers went back after a day or two), I was abandoned there by my oldest sister who was tasked to  stay with me for a week and protect me from ragging.

I learned there were only two options. Swim or sink and I chose to swim. But it was  tortuous. It was such a horrible feeling to be 17 and all alone.

I didn’t even have clothes that I liked. My sister bought my sarees and I hated them. I was not even asked what kind of sarees I like to wear. Two years go, I wanted to wear a saree for Yaya’s graduation. I didn’t own a saree (except for the one BE and I bought together and I didn’t want to wear it) and I asked my best friend to help me buy a saree when he went to India  for a meeting. He bought a saree and couriered it to me. It was a beautiful midnight blue plain saree with a golden border. Even he knew I don’t like printed sarees.

Only I had the dubious record of having my virginity keepers (mother and my oldest sister) coming over to snoop and go through my personal stuff while I was at the hospital doing rounds or attending classes. My oldest sister even took photo negatives from my room, which I assume she would have taken to the studio to take copies to find out who I was with. All that trouble she went through to ensure my virginity.. sigh

Once when I escaped from  the campus because I was told that George was coming to visit me, my sister wrote to the Principal ( a very legalese sounding letter) and the Principal up on receiving the letter, came to my lecture hall and screamed at me in front of 150 students and called me a whore. (I already had a bad reputation, so this name calling episode was just the icing on the cake) My sister even gave a sample signature, so the college could verify the authenticity of any leave applications I submited. It took me weeks of practice for me to be able to forge her signature. I also had help from friends in Kottayam who  sent telegrams that purportedly said that ;grandfather seriously ill, start immediately’ if I really needed to escape.

This was the room that taught me that I am capable of surviving against all odds and finding love.. that there is guy who can love me for who I am not for the family I came from.. This was the room, where I would sit by the window and wait patiently for my room mates to go to bed and then flick the light switch three times to let Beautiful Eyes know that it is safe to come over and bring me food. He used to go to the Dhabas in the highways and would often bring food for me. I can still remember how soft his hands were when he passed the parcel to me through the window.

This was the room that I hid most days to escape from the harshness of restrictive education that only wanted and encouraged students that conformed. Some of the cleaners were really a pain in the butt. I remember once,I had given the cleaner a letter to post and my mother had come for inspection that day and the cleaner gave my letter to my mother instead of giving it to the postman. She must have also been entrusted to protect my virginity by my family. I remember how I felt that day.. I felt so alone..that even the cleaner felt it was right to betray me. Funnily enough, that letter was addressed to my maternal grandmother. Except for my immediate family, all letters from others were sent C/o to a classmate who didn’t stay at the hostel.  Any letter that I wanted to send after that day was given to my classmate who posted it for me. It was also the same classmate who helped me collect all the letters the college sent to my parents, often it was my lack of attendance or the zeros I collected for all the class tests. I used to sign it on behalf of my oldest sister/mother and gave it back to my classmate who would then help me by giving it to the postman to deliver it back to the college. It was always worrying that I would be caught if someone had checked the postage seal.. and I would wait anxiously for the next bomb explosion followed by my suspension. It was a stressful period.

Even though it was a horrible time in a lot of ways, I have a lot of good memories. I was loved !

Simple things like hugging me when my world was falling apart.. singing my favourite song to cheer me up, eating spicy chilli bhaji with me because I like spicy food, eating Parle G biscuits after a long trek .. going for long rides because there was nothing I liked as much as resting my chin on his shoulder and the assurance that this is the guy I wanted to spend the rest of my life with… all those books I read.. and actually passing the exams without studying.. it all happened when I stayed  in that room. I learned that there was nothing that can stop me from doing what I want to do. I learned to live and love.

PS: I think you didn’t understand why I don’t want anything to do with you. Every time I have to write about you, I go through such enormous pain because you have done everything possible to hurt me and are continuing to do so. We shared a womb and a miserable childhood. Other than that I have nothing to do with you. First you contacted my child knowing very well that I protected her from you all these years. Now you have contacted my children’s father. I am not sure what game you are playing, but I am not willing to play your games.  Please stop.