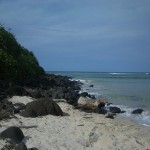 Yesterday I wanted to go to my favourite beach. Tide was in around 3 pm, so I thought I would leave Brisbane by 2 and get to the beach in time for the high tide. Yaya’s exams were delayed and by the time I left Brisbane it was already past 3.30 and then I got stuck in peak traffic. I reached the beach around 5pm and I found that the track that I normally use for hiking is closed. So I decided to hop/walk on the rocks to get to where I wanted to go.. ( you can see the rocks in the photo above)

I am very safety conscious ( at least that is what I thought) and even planned my escape route if the tide gets unnaturally high. There were few paddleboaders in the water, returning to the shore and I waved hi to them and continued with my rock climbing, I was bare foot, carrying my back pack that contained my beach towel, book and a bottle of water. I was really enjoying the walk, it was really beautiful, very quiet and tranquil and I felt so much at peace. Then I heard a familiar rustling sound and where I was about to step on was a snake. Ideally I should say, I am Methran Thambi’s grand daughter and am fearless. But I was frozen, I wanted to run screaming, but I was still standing on top of a rock and I still needed to walk back all the way back to escape. Eventually, the snake went away. But the problem was when you see one snake, you imagine a snake hiding beneath every rock, every leaf moving was a snake..and it was really traumatising..I just couldn’t walk back all the way climbing on the rocks. I finally found a track that let me get back to the trail that was closed.

I had left my phone in the car, there was not another human anywhere near me and if I was bitten by the snake, I wouldn’t have made it alive.

As far as my stupidity goes, this should top my list.