The trip to Sydney was probably the worst I have ever planned. Either I am growing too old or I am getting too lackadaisical.

First of all I got Yaya’s graduation date wrong. I assumed(wrongly of course) it was in December, so I had to cut short my trip.

I forgot to pack toiletries and my hat, sharing a toothbrush was not something I am fond of, and there was no choice as we had planned a full day of activities and didn’t have time to wait for the shops to open.(my mental faculty is clearly on a decline)

So these are the things we did.

We only had the car for a day, (we could have extended it, but at the time we booked it there was a promo and if we were to extend the initial  rental period, we had to pay full price. I am too stingy)

From the airport, we drove straight to blue mountains. We got there around 3.30 pm. There were not many people around, so we did all the walking trails. 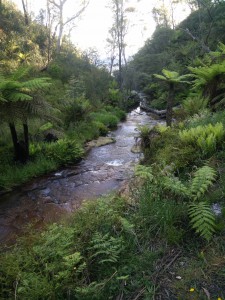 The weather was very pleasant and we had the trails to ourselves.

We left Blue mountains around 8 and drove to Sydney. Both of us wanted to see the Opera house lighted  with the French flag colours, so we thought we would take a quick stop over at the Opera house. We found a car park near the opera house and the signboard showed first 30 minutes was 10$. We only spend 10 minutes and went to pay  for the parking and to our surprise it was 38$. Apparently they have a flat rate after 8 pm and it is 38$..which was written right at the bottom of the signboard displaying rates which no one would be able to read. Technically at 3.80$/minute, that was the most expensive car park we have ever done.

We had booked accommodation at Coogee beach. It was a beautiful old apartment converted to a boutique hotel. The main door had stained glass and I love watching light reflecting through stained glass.

He still makes the worst Chaya ever (following the same procedure of dumping sugar, milk and teabag in to a cup and adding hot water and then not stirring it). But the fact that he wakes up before me, so I could have hot Chaya makes up for it.

First day we bought opal card and went to Circular quay and took all the ferries. We loved Watsons bay the most, so decided to spend our day there. 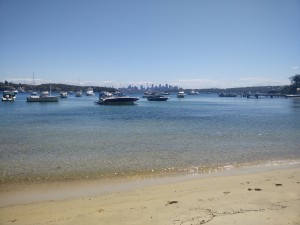 We had lunch and then found a shady spot to sit down and read. I wanted to read Tuesdays with Morrie (will write why tomorrow) again, it wasn’t a big book and the biggest blessing is that he doesn’t bother me much if I want to read, so I finished reading the book pretty quickly. He bought me a cappuccino in between.

Later in the evening, we went back to Circular quay and walked up and down George street, China town, QVB etc. We had dinner at a Malaysian restaurant called Petaling street

Second day, we were planning to wake up very early and do the Coogee Bondi walk. Apparently, I was sleeping  like a baby and he didn’t want to disturb me. I got up at 9AM and had a cold cup of Chaya, which he made at 6 AM, thinking that I would wake up on time like I normally do. I really wanted to do the walk and hate changing plans in the last minute, so we decided to do the walk..on a day the temp hit 38 degrees..Neither of us had a hat. So we had to find a shop to buy hats and paid ridiculously expensive price and then we walked the whole distance from Coogee to Bondi. It was really hot and there was hardly any shade anywhere. But the view from all the look out points were magnificent. By the time we reached Bondi, we were dehydrated, tired and exhausted. I was waiting for him to get angry/crabby. He didn’t. Instead he bought juice for both of us and found a shady spot for us to rest a bit. After that, we decided to take a bus from Bondi to Watsons bay again..We had a late lunch there, then took a ferry back to Circular Quay to take another ferry to Manly. We did the walk around the national park in Manly. He is scared of reptiles, so whenever  we do a bush walk, I had to lead. Every time we saw a water dragon, even though he is scared of them, he would l tease me with great panache  about my crocodile discovery.  I blame my son for this. A week after we arrived in Australia, I was in the garden and I saw this animal that looked like a crocodile, but very small in size and I assumed it was a baby crocodile, so I did what I am really good at. I screamed at the top of my voice and everyone came to see my baby crocodile. In my defence, my only experience with Aussie wild life until that moment was watching the movie Crocodile Dundee  and  I swear water dragons do look exactly like a croc.. My son makes it a point to tell everyone  about my baby crocs discovery.

That was it.. three days trip to Sydney..